I would be interested in migrating my third party and internal applications from SSL connection to RSSL and would like to know in advance the requirements and the necessary changes in the configuration.

I understand that they need minimum RFA 6 /UPA. SFC or SSL Developer Kit do not support this transport. Could you please confirm what APIS language and versions support RSSL?

I understand that the third party application should have been developed to use OMM messages and they need to add the following entries in their configuration file adding in the connectionList ="Connection_RSSL" ?:

Please, let me know if I am missing something else

Thank you in advance for your help

I am not sure if I reading between the lines, but I just want to make sure that the client realises that just adding those Connection_RSSL entries to their config file wont suddenly make the app start working with OMM data. I mention this because I have had clients who were under this mistaken impression.

If they do need to rewrite their application and it in only Consumes data (rather than publish/provide data), then it may be seriously worth considering using EMA C++ rather RFA C++.

The most basic EMA C++ example that consumes some data and outputs to screen uses approx 30 lines source file e.g.

Granted, the above is an extremely simple example, but it does result in a Login, Item request and output of received data to the screen. The equivalent RFA C++ example would take a few hundred lines of code to implement.

EMA defaults many of the required administrative activities -e.g. Login, Dictionary download - and performs them behind the scenes on the developers behalf. For key functionalities, it is possible to override this default behaviour if / when required - which would require the developer to write some additional code - but even this would typically require far less effort than the RFA equivalent.

As mentioned earlier, EMA currently only supports Consuming of and Posting (contribution) of data, so if the client app is a Provider - then presently they would still have to use RFA C++. Although, I understand the Provider functionality may be added to EMA in the future.

However, the current version of EMA C++ (3.0.1) only supports consumer side.

You can check API Compatibility Matrix for more information.

About the RFA configuration, basically it requires connection type, server list and port as you mentioned. However, you may need to check the API Configuration Guide for the full list of parameters.

From the configurations, you may be using RFA C++ or RFA.NET.

Therefore the above configuration means that RFA session that uses the "Connection_RSSL" connection will create a TCP/IP connection to 14002 TCP port on p2ps1 server in order to consumer OMM data from p2ps1 server.

RFA is actually two APIs: RFA/SSL and RFA/RSSL, to migrate from SSL/Marketfeed to RSSL/OMM is a significant rewrite. This rewrite may actually be more effort than migrating to the Elektron SDK. 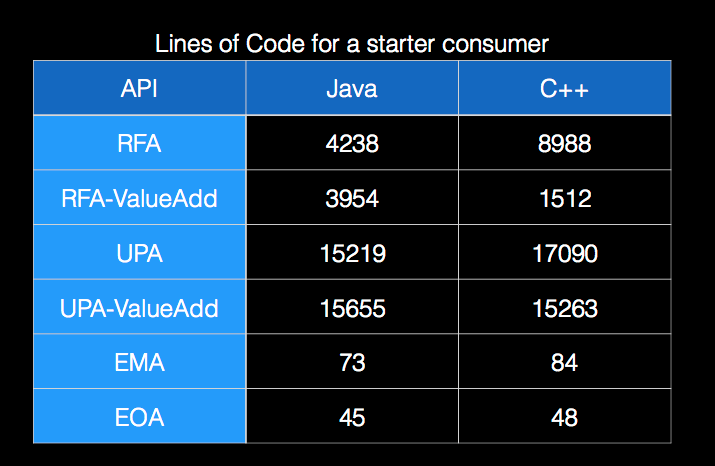 Please be aware there have been many changes to RSSL/OMM and that older versions (7.0 and earlier) may have interoperability problems with newer TREP versions (2.6, 3.0) due to changes in the service dictionary enumeration.

I find this comparison useful for my internal presentation on EMA API. This shows the power and simplicity of EMA . I am wondering if you can point me the document from which this screen shot has been taken . So that can mentioned that in reference.

What does RespMsg::ClearCacheFlag actually do?

Can we set up an RFA Session without using the Config Editor?