Will USA RIC code change to another RIC code for the same stock counter in a certain period of time? If so, is there any indicator on the change from the response that we received from Refinitiv?

As per titled, here is the scenario (fictional)

1. Say 1st Oct we received an USA RIC code of XXX.A. On this same day, a client buys shares for this RIC code. The portfolio that we have right now in the system is based on XXX.A

Is the scenario above possible? If so, we need to do data patching for the client's portfolio and we may need to know the indicator saying that there is a change for RIC code. For other info changes such as stock name, we able to map back using the RIC code but for RIC code changes itself, mapping for old RIC code maybe needed.

Ignore this question if this scenario is not possible. Thanks and have a pleasant day ahead.

I have been informed that you can subscribe to weekly RIC changes on My.Refinitiv. Here is the link for symbol changes - https://my.refinitiv.com/content/mytr/en/symbolchanges.html.

Your RFA application can also subscribe be - CA/CHANGES1, US/CHANGES1 RICs. These are page based views and you can follow the links within the first page into your specific exchange. Download the the speed guide tool - https://developers.refinitiv.com/en/tools-catalog/speedguide to see this in action. 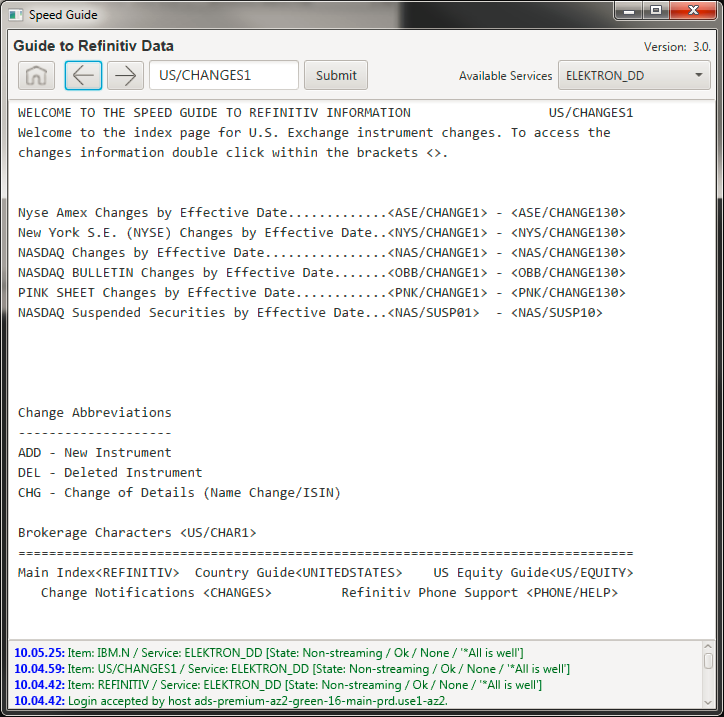 Instrument identifiers (RIC) change all the time due to acquisitions, mergers or name changes like RIMM -> BB. You will not be able to get this information using the RFA API.

If you are developing a portfolio management application, your application will also have to maintain a security master and track the RIC changes and de-listings etc.

I believe there is a change notification system - maybe from the listing exchange, which you might have to subscribe to. Please create a service ticket with content helpdesk to find out more.

How can suppress such warning : RFA8_Connections.mc (0) : Error: unable to open input file