For a deeper look into our DataScope Select REST API, look into:

That seems to be wrong, since it does not return with further calls in HistoricalData and it is not returned from the DataScope web application. What am I doing wrong?

Parameter of the EquitySearch are:

The syntax including a "^" indicates a delisted RIC. The original RIC is before the "^", so in this case it is ZURZn.S, which delivers results in a historical search: 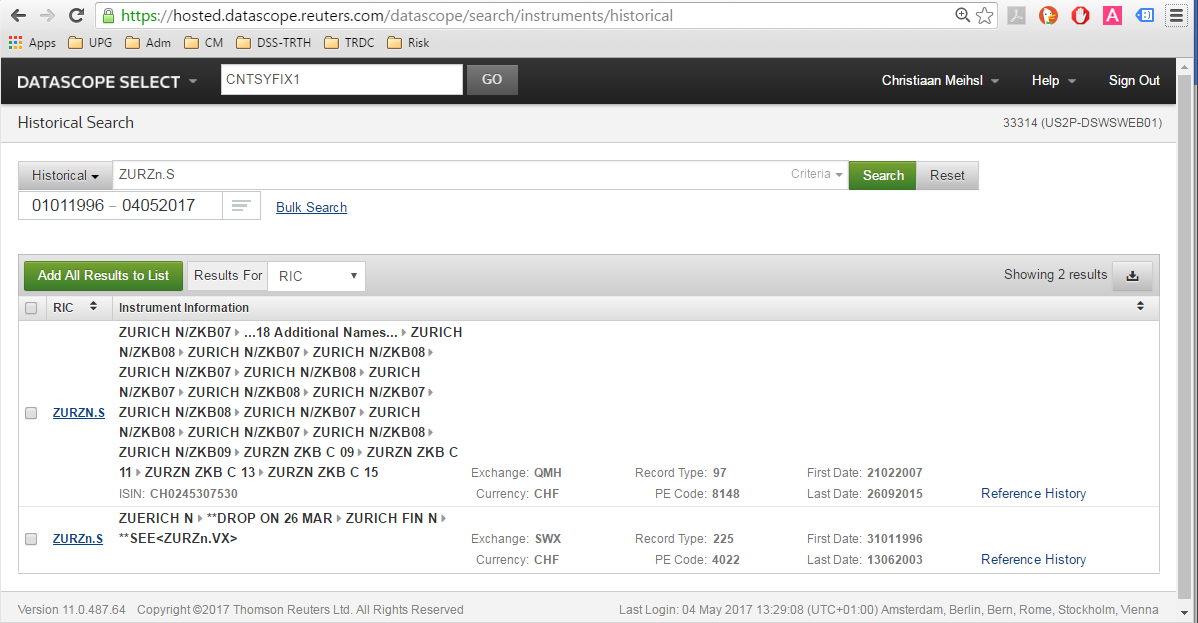 Delisting can be due to various reasons. In this particular case it is due to a (series of) name changes, because ZURZn.S became ZURZn.VX, then ZURN.VX and is now ZURN.S !

In the equity search results the current RIC ZURN.S is not under SWX but under VTX. Same in the DSS GUI, same inside Eikon. Strange, it looks like all blue chips are under VTX, whereas other instruments are under SWX (like ALLN.S, ISIN CH0008837566).

Added yet later after more investigation:

Blue chips initially moved from SWX to VTX. When the blue chips quoted on VTX returned to SWX it was decided not to change the exchange for the blue chips, in order to distinguish the Blue Chip RICs.

As you forced the search to deliver SWX results it delivered the most recent one for SWX which was the very old delisted RIC (hence the strange syntax), from the time before the move to VTX.

If you search using exchange VTX it delivers the most recent one for VTX, which is the current RIC.

In case you want some context: SWX fact sheet

To make it easy:

Filter on exchanges SWX and VTX, and add a criteria to deliver only current instruments:

I added a solution in the form of a Postman example, after you accepted my initial response. Hope you will find this useful.

@ChristiaanMeihsl Thanks for yout effort, yes this is an improvement on the way we create requests, thank you.

DSS does not return CUSIP, ISIN, or SEDOL