Endpoints to use and the metadata to POST to createNewEntity or insertFile?

Will like to ask what the endpoints to use and the metadata to POST to createNewEntity or insertFile?

htmlparse is a function to convert into html codes; 80 is the context ID for TRIT_nt

http://dds-test.thomsonreuters.com/app/repositoryContext/show/80 --> no indication of import;

Through the Create new Entity of Document type 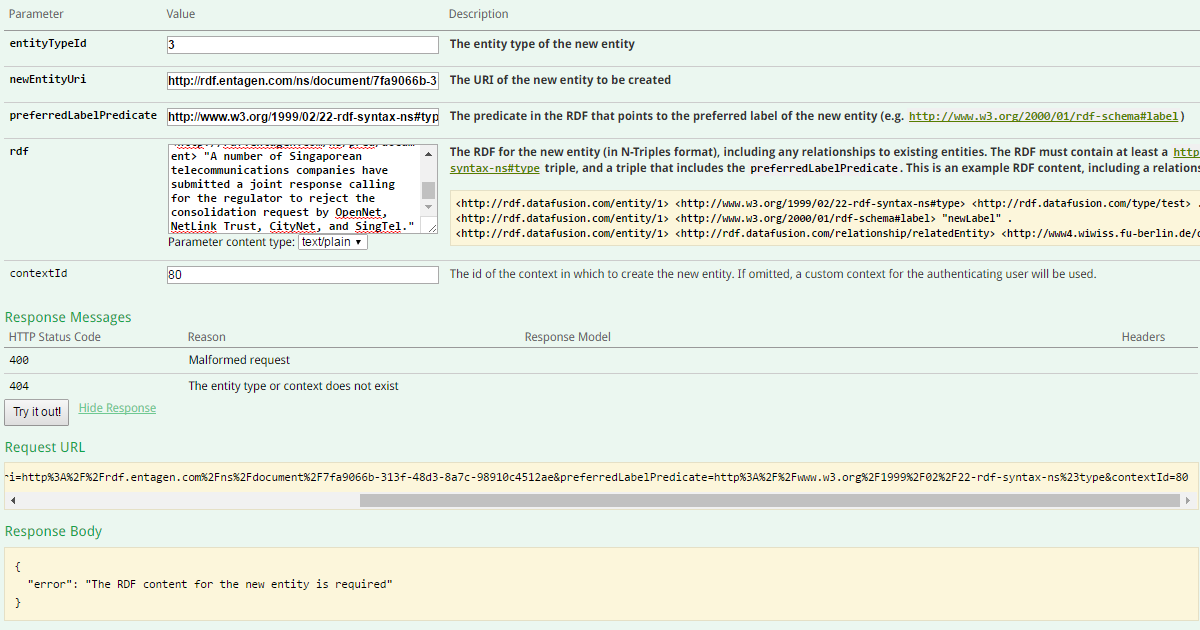 <http://rdf.entagen.com/ns/document/c14d798a-f710-4d36-90bd-de25807eb03e>; <http://www.w3.org/1999/02/22-rdf-syntax-ns#type>; <http://rdf.entagen.com/ns/type/document>; . <http://rdf.entagen.com/ns/document/c14d798a-f710-4d36-90bd-de25807eb03e>; <http://www.w3.org/2000/01/rdf-schema#label>; "Number porting woes for MyRepublic 07-09-2012" . <http://rdf.entagen.com/ns/document/c14d798a-f710-4d36-90bd-de25807eb03e>; <http://rdf.entagen.com/ns/pred/document>; "Number porting woes for MyRepublic - Straits Times (Singapore)--Irene Tham Technology Correspondent-07-Sep-2012 08:00:00 AM-Copyright Â© 2012 SPH-English-470 words--THE carrot from new Internet service provider MyRepublic was: Sign up for a 100Mbps fibre broadband plan for $59 a month - and get a free landline.-That offer at the PC Show in June attracted 800 customers, of whom 200 did not want new landline numbers offered to them starting with 3. Instead, they wanted to retain their SingTel and StarHub home phone numbers that started with 6.---To their surprise, they have been told that they cannot port over their old numbers the same way mobile phones users do when switching between service providers.-MyRepublic subsequently apologised to aggrieved customers for its mistake in assuming that SingTel and StarHub would support porting to the ISP.-Number portability of landlines has emerged as a sore point as more ISPs plug into Singapore's fibre broadband system.-New ISPs in the past two years include MyRepublic and Zone Telecom. To be competitive, they bundle an Internet protocol-based landline, a staple these days, with their broadband plans.-"From a customer's perspective, broadband is tied closely to voice," said Mr Malcolm Rodrigues, chief executive of six-month-old MyRepublic.-"But one of the key hurdles is number porting. Customers who want to switch to an innovative broadband provider but want to keep their home voice number cannot do so."-Mr Rodrigues wants the Infocomm Development Authority (IDA) to look into the matter, alleging that the inability to port landline numbers gives incumbent service providers an "unfair advantage" over new ones.-This is especially since Singapore's new fibre broadband system is built around non-discriminatory terms and prices that are supposed to allow new players to come in without making heavy infrastructure investments.-When contacted for a response, a SingTel spokesman said it "fully supports" the porting of 6-series landline numbers - but only with StarHub, M1 and Verizon Communications Singapore.-The interconnection among them is governed by business agreements outlined in IDA's fixed line number portability guidelines for facilities-based operators (FBOs) that own telecommunications infrastructure here.-MyRepublic is not an FBO as it does not have infrastructure. Instead, it resells a telco's services.-An IDA spokesman said the alternative is for MyRepublic to apply for an FBO licence that requires an investment in systems to provide emergency call services and number portability, among others, with other telcos.-"These requirements are imposed to protect consumers because end-users expect telephone service using 6-series numbers to be as good as traditional copper-based fixed line telephone services," said the IDA spokesman.-The non-portability issue has upset MyRepublic customers such as Mr Cai Yilun, 27.-"I don't understand why I can port my mobile number freely but can't for my landline," said the IT consultant.-Another customer, Mr Muhammad Mohsin, 29, a software developer, said: "No service providers should be left out because they are small."-itham@sph.com.sg--Document: D-SINGAPOREPRESS-T001/I7628a070f94111e18f93dfd055f2d7c8--Thomson Reuters 2016. All rights reserved. The Thomson Reuters content accessed through this service is the intellectual property of Thomson Reuters or its third party suppliers. Republication or redistribution of content provided by Thomson Reuters is subject to the terms of the relevant service agreement. Neither Thomson Reuters nor its third party suppliers shall be liable for any errors, omissions or delays in content, or for any actions taken in reliance thereon. Thomson Reuters and its logo are registered trademarks or trademarks of the Thomson Reuters group of companies around the world." .

Will be fixed in the next release.

Fails silently because the underlying N-Triples parser expects ASCII output and a number of characters like quotes escaped, but the format of the file you're supplying is UTF-8 and is unescaped. Improved error notification has been added to the backlog as well as an update to the parser to support UTF-8.

Are data fusion entity type codes fixed or will they change?